In 1992, after seeing a National Geographic special on bears, I was determined to win a permit to visit the McNeil River Bear Sanctuary 300 miles south of Anchorage Alaska on the Alaskan Peninsula northwest of Katmai National Park and the Valley of 10,000 Smokes.  I won the permit (that's a story by itself) and decided that if I was going to go that far, I might as well see as much as I could of Alaska, so I planned a month long trip.

I flew to Seattle, where I caught the five-day ferry to Juneau, camped out on the stern of the ferry. I toured the Juneau area for several days, hopped on a small plane to Haines, where I caught a three-day bus to Fairbanks, pitching my tent wherever the bus stopped at night right on the ALCAN.

I spent several days in Fairbanks, and then took the train to Denali National Park, where I backpacked for three nights in the Moose Creek section.  At one point during this trek, I was 16 miles away from Chris McCandleless, the hapless soul from the Into The Wild story, who was in his last week of life.

From Denali, I hopped back on the train to Anchorage, where I met a young student named Michele Goldman, who gave me her copy of Peter Singer's Animal Liberation, a book I kept unread on the top of my refrigerator until I read it in November 2000, when it changed my life.

After several days in Anchorage, I flew to King Salmon on the Alaska Peninsula, and then to Brooks Camp in Katmai, where I camped among the bears for three nights.

On one of my days in Brooks, I took a bus to the Valley of 10,000 Smokes and was so taken in by the sheer beauty of the place, I vowed to return, and I did (see 1993-1995 trips, below).  The Valley to this day is still covered with ash hundreds of feet deep, resulting from the eruption of Mount Katmai on June 6-8, 1912, the largest volcanic blast in the 20th Century and the sixth largest ever. The landscape looks so much like a moonscape that the Apollo astronauts trained there for the moon landings.

From Brooks, I chartered a small float plane operated by a maverick pilot named Bo to take me to McNeil River and after a rather harrowing 90 minute flight, Bo dropped me off at McNeil River. During my six days there, I was able to get to the 10-person bear-watching platform, and got as close to the world of the bears as anyone could get.  One day, up and down the river in front of me, I counted 65 brown bears (grizzlies, only bigger), some as close as five-feet away too busy munching away on freshly-caught salmon to be interested in trading it for some human flesh.  (Several years later, just a few miles south in Katmai National Park, "Grizzly Man" Timothy Treadwell was not so lucky.)  One day, after sacking out in my tent, I hung out in the cook shed for the small base camp. While the, a young bear intruded into the camp and took out my tent.

After McNeil River, I took a float plane to Homer, where I spent a few nights, and then rented a car to tour the Kenai Peninsula, all the way to Seward, where I took a boat whale-watching for a day.

What a trip!  Before that trip, I can never recall that I had any interest in going to Alaska, until I saw that National Geographic special in bears.  So far, as of 2018, I have been there nine times.

On The Road Patch 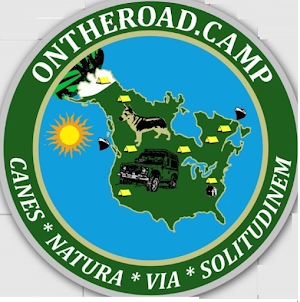 The patch I usually award to like-minded souls I encounter on my journeys. 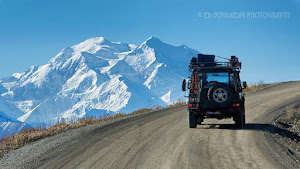 Photo by Ed Boudreau. Zoom in on the Defender and you will see Leben’s wheelchair hanging off the ladder on the left rear.