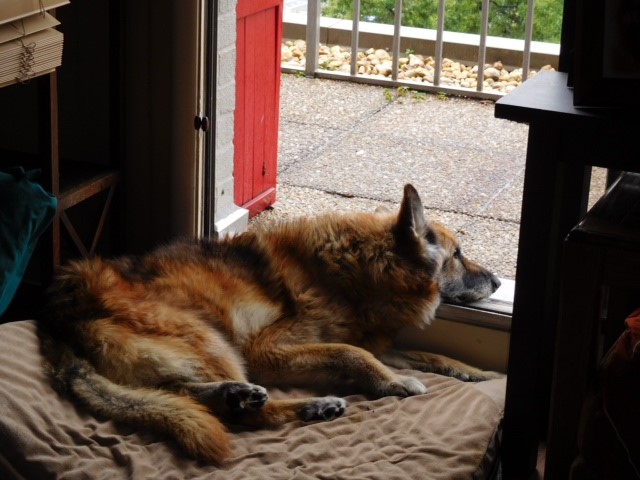 In July, 2015, after more than 14 years, Erde started to slow down. I had been planning another long road trip with her, but as July turned into August, and August turned into September, the length of the planned trip shortened.  In early September, she started to go lame herself, so I took her for long walks in her brother Leben's dog-stroller, which she enjoyed as much as people enjoyed seeing her.  As September drew to a close, I was down to planning a weekend camping trip with her in a local campground. But I knew the end was coming for her as she lost weight, could no longer eat even her favorite foods, and got little enjoyment out of life.  An end-of-life vet came by on the afternoon of October 2nd and gave her a morphine patch to reduce any pain she was in.

I sat with Erde for over an hour as the patch took control of her, listening to Arvo Part's Fur Alina, the same music I played when her brother was put down the year before in he same spot in my living room.  I then set her in her bed by to door to my balcony terrace so she could look out at the trees during the night, feel the cool October breeze and dream about her several hundred nights on the road when she loved to lie outside the tent. I slept on the sofa in my living room just feet away. When I woke up at 5 in the morning, she was gone.

What a sweetheart that dog was - fun loving, disobedient to the point of being cute about it, a rebel.  And, boy, did she worship her brother, Leben, and vice versa.

I still have Erde's and Leben's ashes with me, and want them scattered with mine after I go, in the same spot in the Alaskan Arctic where I scattered Sonntag's and Kessie's ashes. (Montag's ashes were scattered in the Shenandoah mountains where we spent many weekends backpacking. Donner's ashes will go with mine, too.)